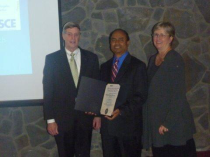 Monterey Park, Calif. – March 6, 2009 - Mohammed A. Hasan, a local consulting engineer, has been named an esteemed Life Member of the American Society of Civil Engineers.  This   honor is given to individuals who have provided dedicated service for over thirty years in the profession. His accomplishments were “show cased” at an annual meeting of the society’s Los Angeles section held at Monterey Hill Steakhouse in Monterey Park, CA.  Ms. Kathy Caldwell, the national ASCE President Elect was the featured speaker and presented the plaques.

Founded in 1852, ASCE represents 147,000 members of the civil engineering profession worldwide, and is America's oldest national engineering society. ASCE's vision is to position engineers as global leaders building a better quality of life.

Hasan is the principal engineer and owner of the Ventura firm of Hasan Consultants, which provides services in civil and environmental engineering.  He received his undergraduate degree in Karachi and two master’s degrees from the University of Iowa at Iowa City, Iowa. Hasan is a licensed Professional Engineer and a Registered Environmental Assessor in California. He is also a fellow of the American Society of Civil Engineers. Prior to opening his engineering firm in 1984, he served as the utilities superintendent of the city of Oxnard.

A native of Bangladesh, Hasan came to the U.S. in 1971.  He has been involved in various community activities in Ventura County for over 35 years including President of Ventura East Rotary, Judge at the Science Fair, Easter Seals Tri-counties, and Muscular Dystrophy Association, President of Ventura Trade Club and Consult/net and other charitable organizations.  Hasan lives in Ventura.  He is married to JoAnn, and has two daughters, Yasmin 24 and Mishty 17.

Civil Engineers build the world's infrastructure. In doing so, they shape the history of nations around the world. 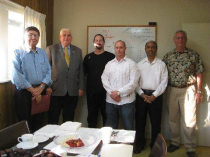 In August, 2009, Hasan Consultants celebrated 25 years of business in Ventura County and neighboring areas.  Commendations were received from the State and local governments and a large community party was held at Arroyo Verde Park on August 22nd.

For answers to your questions, or to schedule an appointment, please call us at:

or send a fax at:

or send us an email at:

We are proud to be members of the following professional organizations: